Skip to content
Gideon made it into an ephod, and placed it in his city, Ophrah, and all Israel played the harlot with it there, so that it became a snare to Gideon and his household. (Judges 8: 27 NASB). 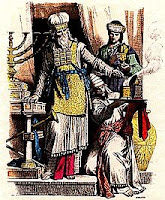 Gideon was a good man, but good men sometimes do foolish things.  It is never right to do evil things with good intentions.
Gideon had requested gold earrings from the plunder from his victory over Midian with which he made a household idol.  Commentators have suggested that he either wanted to make the ephod to memorialize his great victory or use it to seek future guidance from the Lord.  The ends never justify the means.  The strategy of our enemy has always been to mix good and evil. If the enemy cannot get us to forsake God directly he leads us to compromise our faith.  In the end, this replaces the true God with a false one.
When God enacts a great victory for us there is the tendency to try to keep it alive by human means.  What God does in the Spirit we think we can perpetuate by human methods. When the memories of victory start to wane we can substitute things we can touch and feel.  Remembrances are not always wrong, but we can start to worship the victories of God rather than the God of the victory.  This leads us to living in the past rather than looking to the future.
Gideon’s error may not have been in just what he worshiped, but where. His shrine was in his home in Ophrah and not in Shiloh where they were directed to worship.  If we shun corporate worship it can lead to apostasy and false religion.
Ken Barnes, the author of “The Chicken Farm and Other Sacred Places”  YWAM Publishing
Email:kenbarnes737@gmail.com
website: https://sites.google.com/site/kenbarnesbooksite/
Blogs:  http://kensblog757.blogspot.com
http://gleanings757.blogspot.com
Image used with permission by Microsoft.