Skip to content
Then the Lord’s anger was aroused against Uzzah, and he struck him dead because he had laid his hand on the Ark. So Uzzah died there in the presence of God.
(1 Chronicles 13:10 NLT) 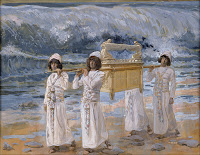 David and all Israel had sought to bring the Ark of God back to Jerusalem, a good thing.  To transport the Ark, they placed it on a cart, a bad thing.  It never works to try to accomplish good purposes by using improper means.

Israel had been given detailed instructions on how to carry the Ark of the Covenant.  It was to be carried by the Levites on long poles.  Afterward, David realized the error of his ways.  “Because you Levites did not carry the Ark the first time, the anger of the Lord our God burst out against us. We failed to ask God how to move it properly.”
(1 Chronicles 15:13 NLT).  In our efforts for God, details do matter.  It is true that Uzzah showed disrespect by reaching out to the Ark to steady it, but when leaders, such as David, do not fully obey God, they always put their people in precarious situations.  Disobedience always programs us for failure. After Uzzah died, David got angry with God and refused to take the Ark to Jerusalem, where he should have been upset with himself.

We see in the Scriptures where the Philistines transported the Ark on a cart (1 Samuel 6).  Are you trying to do the work of the Lord by the ways of the world?  It never works. David tells us his fundamental error, he failed to ask God how to do it. When we think we know how to do it, generally, we don’t.  Good intentions never justify wrong actions.

Image used with permission by Google.