Skip to content
Jesus *said, “Remove the stone.” Martha, the sister of the deceased, *said to Him, “Lord, by this time [a]there will be a stench, for he has been dead four days.”
(John 11:39 NASB) 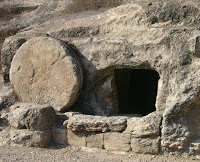 Most people know the story of Jesus raising Lazarus from the dead.  What would have happened if Martha and the others present at the tomb had refused to roll the stone away?
A miracle happens when God temporarily suspends or reverses the processes of nature.  Something occurs that would not take place under normal circumstances. Martha’s concern was based on her knowledge of biological processes.  A dead body after a short period of time starts to decay and the gas released will produce an unpleasant odor.  In this story, there is a conflict between the natural mind and Jesus’ command. Generally, miracles are a combination of the natural and the supernatural.  God speaks, and we respond.  We do the possible and God, and God does the impossible.
Jesus responded to Martha’s hesitation in v. 40, Jesus said to her, “Did I not say to you that if you believe, you will see the glory of God?”  There was a battle going on here between the natural mind and Jesus’ command.  Fear always is the foe of faith.  Would they remove that stone and be overcome by the smell? My point here is not whether you can raise someone from the dead, but the principle behind the miracle.  Most miracles are proceeded by faith in what God has said, as evidenced by an act of obedience.
What rock is God asking you to remove?  Like the anticipated odor from the decaying body of Lazarus, what potential negative consequences are you envisioning from your act of obedience.  Is God really speaking? If he is, remove the rock.
Imaged used with permission by Microsoft.
Ken Barnes the author of “The Chicken Farm and Other Sacred Places”  YWAM Publishing
Email:  kenbarnes737@gmail.com
website: https://sites.google.com/site/kenbarnesbooksite/
Blogs: http://kensblog757.blogspot.com
http://gleanings757.blogspot.com