Skip to content
To him the doorkeeper opens, and the sheep hear his voice, and he calls his own sheep by name and leads them out.  When he puts forth all his own, he goes ahead of them, and the sheep follow him because they know his voice.(John 10:3-4 NASB) 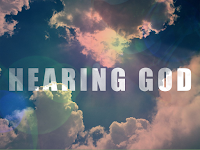 In the world today, followers of Christ are deemed somewhat strange when they say that they have heard God’s voice.  Even other believers in Christ can be skeptical. In the Bible, it is unusual when godly people do not hear his voice.
Thomas Szasz, a psychiatrist, once said, “If you talk to God, you are praying; If God talks to you, you have schizophrenia.”  I am not sure if Szasz was being sarcastic, but this is how people many people think.  Communication is always a two-way street.  This is an accepted norm except concerning God.
Of course, at times Christians think they hear weird things from God.  Sometimes we misunderstand what God is saying.  I say things that sometimes people do not understand.  We do not stop speaking with each other, we clarify to understand each other better. Such is the communication process. From Abraham to Moses, to David, and Paul and the Apostles, it is a given that they spoke to God, and God to them.  God’s Word is the primary way we hear his voice, but not the only way.  It is the yardstick by which we judge what we hear from God.  God never contradicts his Word.
How can you have a relationship with someone where the conversation is a monologue rather than a dialogue?  If you are not hearing from God, maybe it is because you are not listening.  And possibly, you are not paying attention because you believe God is not speaking.
Image used with permission by Microsoft.
Ken Barnes the author of “The Chicken Farm and Other Sacred Places”  YWAM Publishing
Email:  kenbarnes737@gmail.com
website: https://sites.google.com/site/kenbarnesbooksite/
Blogs:  http://kensblog757.blogspot.com
http://gleanings757.blogspot.com