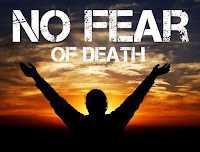 Many of us live in bondage to many things in this life.  Ultimately, there is one great fear owned and propagated by the devil.  There is no greater slavery than the fear of death.
The Bible instructs us that it is appointed for men to die once (Hebrews 9:27). Unless Jesus returns first, all men will experience death.  It is the one great equalizer.  Whether you are rich or poor, famous or not, we will all go the way of the flesh.  The devil is referred to as one who has the power of death.  Satan was the first sinner and the one who first tempted us to sin.  He was the one who brought death into God’s creation, yet by Christ’s death, he defeated the power of the enemy.  Jesus conquered sin by his work on the Cross, and death was overcome by his resurrection, and so will you and I rise with him (Matthew 27:52). As Matthew Henry once said, “Death is not only a conquered enemy but even a reconciled friend. It is not now in the hands of Satan but in the hands of Christ.”
If you are a Christian and still enslaved by the fear of death, you don’t understand the implications of your salvation.  If you cannot approach death well, you will never live well.