Skip to content
If it be so, our God whom we serve is able to deliver us from the furnace of blazing fire; and He will deliver us out of your hand, O king.  But even if He does not, let it be known to you, O king, that we are not going to serve your gods or worship the golden image that you have set up.”  (Daniel 3:17-18 NASB) 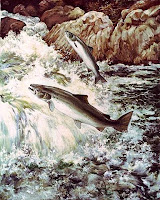 The three Hebrew boys, Shadrach, Meshach, and Abed-nego, were firm in their faith. They had learned that in an adversarial culture, you must learn to swim upstream.
All cultures have a way of conforming us to its precepts. We resist by refusing to submit to anything that is lifted up against the knowledge of God. First, when the delicacies of food and drink of Babylon tested the three Hebrew boys, they chose to remain faithful to the dietary restrictions they practiced in Israel.  Second, when confronted with the idolatry of worshiping King Nebuchadnezzar, they remained committed to the one true God. They believed that God could deliver them, but if he didn’t, they still would not bow down to the golden image. Revelation 12:11 (NASB) says, “And they overcame him because of the blood of the Lamb and because of the word of their testimony, and they did not love their life even when faced with death.” They refused to cling to that last great idol, life itself.
In an increasingly hostile environment in which we live, Christians must learn to swim upstream. God has created in the salmon the need to travel up-river to fulfill the procreation of their species. In like manner, God has put in the hearts of believers the desire to endure the trials of our up-hill battle to receive our reward, the soon return of Christ.
Ken Barnes, the author of  “The Chicken Farm and Other Sacred Places”  YWAM Publishing
Email:  kenbarnes737@gmail.com
website: Ken Barnes’ Book Site
Blogs: http://kensblog757.blogspot.com
http://gleanings757.blogspot.com
Image used with permission by Microsoft.