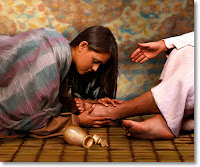 “For this reason I say to you, her sins, which are many, have been forgiven, for she loved much; but he who is forgiven little, loves little.” (Luke 7: 47 NASB)

An immoral women can teach us a lot about the Kingdom of God.  The recognition of our need is the first step toward our entrance into Heaven.  If we are forgiven much we will love much.

Jesus was invited to dinner at a Pharisee’s house.  A woman of ill repute started to weep and wipe his feet with her tears.  She anointed him with expensive perfume.  The Pharisee was taken back that Jesus would let such a sinful woman touch him.  In response to this Pharisee, Jesus told him this story.
A man lent money to two men, five hundred pieces of silver to one and fifty to another.  When they both were not able to repay him, the man kindly forgave them both.  Then Jesus asked the Pharisee, “So which of the them will love him more?”  The Pharisee answered, “I suppose the one who he forgave more.”  Jesus replied, “You have judged correctly.”  The woman saw her need and was broken by her sin.  The Pharisee only saw the woman’s sin and not his own.  If we never grasp the depth of our own sinful nature, we will never understand the enormity of God’s grace in forgiving us.  Whoever sees no need for the cross of Christ, will never embrace it.
The woman in our story was closer to the Kingdom of Heaven than the Pharisee in all his religious regalia.  Recognition of our need for forgiveness is the evidence of a repentant heart.  The woman fulfilled the law of love through faith by which she was saved.  Whoever has been forgiven much, loves much.
Ken Barnes the author of “The Chicken Farm and Other Sacred Places”  YWAM Publishing
Email:  kenbarnes737@gmail.com
website: https://sites.google.com/site/kenbarnesbooksite/
Blogs: http://kensblog757.blogspot.com
http://gleanings757.blogspot.com
Podcasts: http://kensblogpodcast.blogspot.com
http://gleaningspodcast.blogspot.com