Skip to content
My God, My God, why have You forsaken Me? Why are You so far from helping Me,
And from the words of My groaning? But you are holy. (Psalms 22:1, 3a NKJV) 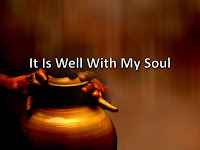 There are times when all believers may feel like God has gone on vacation.  We should not be too surprised when we experience this feeling, as David and even Jesus on the Cross felt abandoned.  The key to dealing with these times is to say, as David did, but God is good.
In 1871 Christian businessman, Horatio Spafford lost everything in the great Chicago Fire.  He planned a trip for his wife and four daughters to Britain. They traveled ahead of him and their ship was rammed by another vessel. His wife survived, but his daughters perished. Spafford immediately left to meet his wife, and as his ocean liner approached the area where his daughters had drowned, he composed the song that has become a memorial to the sovereign goodness of God, “It is Well with My Soul.”
It is not really easy to feel abandoned.  God knows your pain.  Jesus expressed his pain on the Cross and David often conveyed his grief without condemnation from God.  Yet, in David’s dialogue with God, most often there was a point where David said, but God is good.  In our sufferings, we must always have that “but God moment.”
At some point in our conversation with God, it is necessary to interject in good times and in bad, the sovereignty of God.  All things that happen to us may not be caused by God, but he at least allows them.  A very therapeutic thing for us is to realize that in all our trials and struggles, God is still in control, and for all who love him are for our ultimate good.  Remember Joseph, who told his brothers who had sold him into slavery, you meant it for evil “but God” meant it for good (Genesis 5:20).
If we never come to the “but God” stage of our trials, we will devolve into the “why God” juncture and start to doubt the character of God.  Spafford eloquently wrote, “When sorrows like sea billows roll; Whatever my lot, thou hast taught me to say, it is well, it is well with my soul.”
Image used with permission by Microsoft.
Ken Barnes the author of “The Chicken Farm and Other Sacred Places”  YWAM Publishing
Email:  kenbarnes737@gmail.com
website:https://sites.google.com/site/kenbarnesbooksite/
Blogs: http://kensblog757.blogspot.com
http://gleanings757.blogspot.com